Welcome back folks.  For today’s computers and electronics installment I’d like to talk about a recent discovery I made with regard to home security. I’ve recently fitted some security LED spotlights to the outside of my house for the simple purpose of lighting up the garden for greater visibility, and it was only the other day while browsing online for second hand electronics that I came across http://www.canada.for-sale.com/. 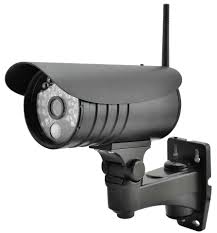 Security, whether for domestic or commercial purposes has been a topic that’s been heavily promoted over the past few years, and rightly so: the modern world is rapidly becoming a more dangerous place as is the development in technology regarding electronics, especially those that utilize WiFi.  In this case home surveillance.  Unlike regular cameras, those used for surveillance differ completely and are purpose-built for just that purpose.  These days they are incredibly affordable too and surprisingly very easy to install set up and operate.

It’s All Getting Easier

Naturally, as technology has raced ahead it has become much easier for people to grasp its concept and overall functionality, especially as the features and functions of modern surveillance cameras can be accessed and manipulated easily from a smartphone, tablet or laptop.  Just as naturally is the ever growing desire for people to share, sorry, show-off their new purchases gadgets and gimmicks among their circle of friends and peers.  What better way than to click an app on your tablet as a small audience gathers round while you flick from room to room showing the girls at the salon your brand new leather sofa (that the dog’s absolutely forbidden from sitting on) as the dog runs in and jumps straight on it.  I’m half-joking of course.

As we’re talking about WiFi surveillance cameras, it’s worth pointing out however that the more expensive hard-wired varieties generally have a much higher picture quality.  Having said that, they’re also more difficult to install, and may require a professional (or team of depending on the sophistication of the installation) to install for you.  It all depends really, and something that is essential to consider, is how much, or how large of an area more specifically, you wish to cover.

This is where the WiFi surveillance cameras are a true blessing of modern technology.  Using WiFi for transmission a wireless security system is much easier to install and they can pretty much be placed anywhere, and moved anywhere at any time, so not only do you save on huge professional installation fees, you get to experiment yourself on a whim, however often you like, and I imagine for many, there’s a sense of satisfaction bordering on fun, in all of that.

One drawback however, is that the transmitted signal has the potential to be interrupted somewhat from other radio based devices such as home phones that are cordless.  As these signals also travel through the air it is possible that they might cause an interruption.  Fortunately, there is a way around this.  When choosing your WiFi surveillance system, just make sure ‘image encryption’ is one of its features.  If it can encrypt images, then you’ll have no problems with external interruption.

Just like the days of old whereby security spotlights evolved into automatic activation through the use of motion sensors, it is the same now for surveillance cameras.  As soon as a potential intruder is presented or the camera sense any movement within a pre-determined field of vision, the camera is automatically activated, images are recorded and the wheels of surveillance are set in motion.  This is a great way to conserve the camera’s battery life, especially if you’re away from home – something well worth considering while planning your home security setup. 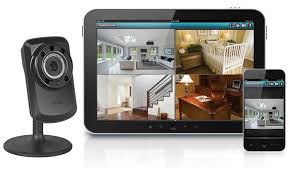 Most systems utilize a hard-drive recording system with varying timescales of backup depending on the size and cost you choose to spend on the drive, if that’s something you choose of course.  So if something should happen while you’re away, and you don’t happen to be viewing your cameras on your device, you can be assured that all activity is recorded and backed up for playback later.

For me, I’ll personally need a couple of motion sensor cameras and two or three standard cameras to cover the areas of importance, plus a hard drive that will keep everything backed up for four or five days will be more than ample.  I’ll be quite excited I guess, in the interim at least, to be spending a lot of novelty time checking everything out on my iPad, rotating the cameras to optimize the coverage and generally marveling at another fine example of how far the world of computers and electronics has come.  Anyway, thanks for dropping by folks, until next time..